It started simply enough. I have wanted to get back into a regular band, and (only partly) to that end, I have asked a few close friends, all non-musicians, if they would be interested in learning to play anything.

I’m a good drummer and a good singer, and I know enough guitar and keyboards to teach someone the basics. I was willing to start someone off with something.

After another declined, my friend Glenn was very interested but completely skeptical if he could actually learn. He and I are on the verge of turning 50 years old, and he said, “Isn’t it a little late for me” and “I don’t know how to read music.” This is especially surprising in his case, as he is basically as young-at-heart as I am, and besides, extremely physically fit. He’s no slouch.

My approach was to sit Glenn down and spend a few minutes just discussing music in general and then to walk through a song.

Walking through a few mainstream rock songs and covering the ‘intro,’ ‘verse,’ ‘chorus,’ ‘bridge,’ etc., became a real eye-opener for him.

I gave him a live demo of me playing for quite some time, explaining everything as I went along. Used a bit of my handy binder of carefully-organized practice material. Then it was Glenn’s turn. I talked about 2-way, 3-way, and 4-way independence and really emphasized that this would be like learning to ride a bicycle. He could immediately see that.

We discussed the importance of using a metronome (no matter what kind of musician you are!). I demoed several of the metronomes that I use, the Korg TM-40 and the Boss DB-88.

Finally, we walked through some catalogs of drums, acoustic and electronic, and practice pads and practice pad kits. We walked over to the shelves I have laden with all of my music books, mentioning that “this is a lifelong activity.”

Quick stop – we went back to the basement for a quick demo of my V-Drums, where I mentioned that if it weren’t for them, I would never have been able to practice quietly. Hint. Hint. Hey, there are relatively cheap ones now!

I taught myself to play the drums using the “Ultimate Beginners Series” on VHS. It was a great way to get over the basics. A year later, I got a good teacher and took regular lessons for a good few years.

So, after we spend about two hours, I had a box ready for Glenn with all of my “Ultimate” books, disks, and videos. On permanent loan…

Any similar teaching experiences? Who wants to be next?!

ADIDE: This is technically not the first music lesson I’ve given. I’ve been teaching my son Rocco music on and off for a few years now. Of course, it’s a completely different dynamic. Neither the teacher nor the student is intimidated. We adults can be so weird! 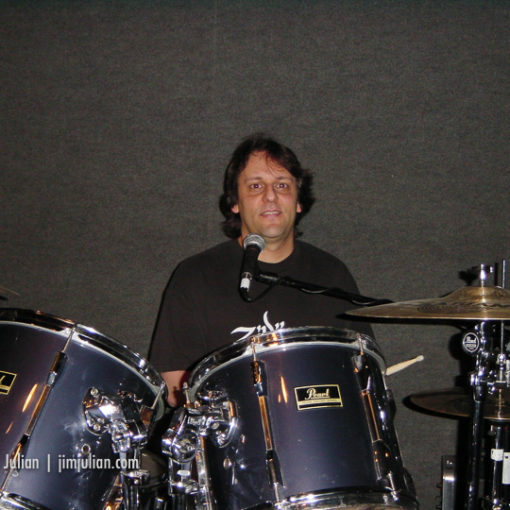 Singing while drumming is not straightforward, but I’ve done it. This picture is of me singing and drumming in a recreational band […]